Whether you’re living off-grid, camping, or even boating, the battery is of utmost importance – especially when you’re in a rough-terrain environment. Marine batteries have an endurance level and can be an effective power source under mild to extremely heavy loads.

Marine Batteries come in all shapes and sizes. The size of the battery really depends on what you intend to run. They are also three types of marine batteries; starter, deep cycle, and hybrids.

Marine deep cycle batteries differ from other deep-cycle batteries in that they are made specifically for use on marine craft. They are typically heavier and capable of delivering more power.

How Many Amp-Hours in Marine Group Sizes

It’s important to choose the right marine battery group size for your boat. The size of your battery will determine how much power it can provide and how long it will last. The most common group sizes for marine batteries are 24, 27, and 31. 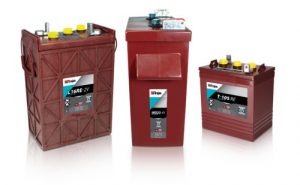 Group 31 batteries are the largest marine battery size, and they’re the most expensive. They offer the most power and the longest life.

Where do Marine Group Sizes Come From?

The Battery Council International (BCI) assigns a letter to indicate the battery’s polarity – positive or negative. The letter is stamped on the battery’s case near the terminal. Batteries with the same BCI group number and letter can be used interchangeably.

The most stable and safest type of Lithium-ion battery is the LiFePO4 (Lithium Iron Phosphate) and has become the most common replacement for Deep cycle Lead Acid batteries including the AGM battery.

Difference Between AGM and Lithium-ion Batteries

If you looking to replace a lead-acid battery with a lithium-ion battery you’ll just need around 60% of the capacity of the lead-acid battery, in this case, AGM batteries that are used in boats and RVs.

However, if you looking to replace your AGM battery with lithium-ion you don’t have to worry about not getting a drop-in replacement. Manufacturers are still designing batteries to fit within all the BCI subgroup sizes.

What is a Marine Battery Box

A marine battery box protects batteries from the elements and provides a place to store them while on your boat. Marine battery boxes are made of durable materials that can withstand the harsh conditions of the marine environment, and they come in a variety of sizes to accommodate different battery types. 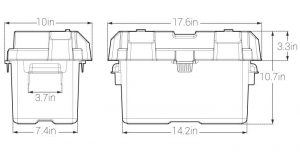 Many marine battery boxes also feature a built-in charger, so you can keep your batteries topped off and ready to go.

There are three types of Marine batteries: A deep cycle, starting, and Dual purpose or hybrid.

A starting battery unlike the deep cycle battery is designed to supply an initial burst of power to get an engine running. The starting power of a Starting battery is measured by Cold Cranking Amps (CCA) which is the amps the battery can deliver in 30 seconds at 0°F.

A deep cycle battery is designed to supply a constant and steady supply of power. This allows them to run for a long time until discharged (up to 80%) and then recharged.

So instead of providing a surge of power over a short period of time, a deep cycle battery will provide a constant charge over a longer period of power. This allows them to sustain loads in 12v or 24v systems including solar systems.

A hybrid battery is also known as a dual-purpose battery.  It acts both as a Starting and Deep-Cycle battery. The battery tries to deliver high discharge currents without excessive voltage sag up.  They however cannot deliver a very high starting current as a starting battery and the cycle life is half of that of a true deep cycle battery.