The Maxoak power bank is a small 50ah Lithium-ion Polymer battery but a massive 50000mAh power bank with DC outlets for charging your laptop and portable devices. It comes with 14  interchangeable connectors, which allow it to be usable for most laptop brands than other models on the market. 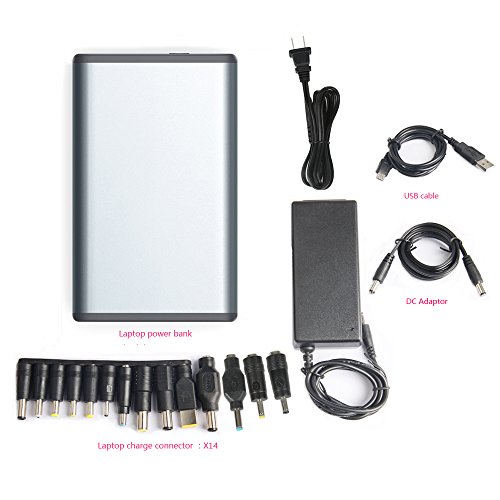 Constructed with Lithium-ion Polymer Battery Cell that has over 1000 life cycles which means it can be charged and recharged over 1000 times before it starts to decline in performance.

Its 50,000mAh capacity means it can charge your laptop up to two times your iPhone up to 16 times and Galaxy S8 up to 10 times.

The best thing about these outputs is that you can charge several devices at the same time.

The Maxoak has over 14 DC connectors that are compatible with most laptops in the market. However, it does not include a USB-C output for Macbook laptops.

The 20V output supports 65W up to 135 Watts so it can charge your Laptop quite quickly compared to other power banks.

The Maxoak Power Bank can be recharged using 100V ~ 240V AC input voltage. It has four built-in LED lights that indicate battery level (25%, 50%, 75% or 100%). There are also three buttons on top of the power bank that allow you to check how much is left in it after a full charge. When the battery power is low, you can press any one of the three buttons to find out how much battery life is left in it.

The Maxoak Power Bank has Overcharge Protection. It charges your laptop only when the Li-ion polymer battery is fully charged and prevents overcharging even if its AC plug is connected to a power source for days. The Over-discharge Protection prevents excess energy from being wasted during times of low energy consumption.

If you have no device attached, or the attached device has been turned off, this will prevent discharging beyond what has been previously programmed into the system by digital control equipment (regulated by software). The Short Circuit Protection protects against accidental short circuits on output terminals through electric current limiting, thermal shut down and safeguarding against over current.

The Aluminium casing allows for the easy dissipation of heat and rarely will it get too hot.

Noiseless & Does not Heat up

Because the Maxoak relies on DC power there is no conversion of DC to AC power hence no noise, no heating up and no need for a fan.

How the Power Bank is Used with a Laptop

Maxoak’s power bank has interchangeable connectors for more compatibility, so Maxoak makes it easy to find a compatible connector for your specific laptop brand. This allows the power bank to charge laptops from various brands.

Note: Maxoak states that you must use your original charging cable for your laptop to charge through the power bank. Using other charging cables may result in damage to your device.

Maxoak’s power bank automatically turns itself on when connected to a laptop. If you are not using it for your laptop, please ensure that the power bank is turned off by pressing the ON/OFF button until there are no lights showing.

How do I check if the Maxoak will charge my Laptop

There are four things to look out for to check if the Maxoak power bank will charge your laptop.

The Maxoak is rated 19.5V or 20V. If your laptop’s adaptor does not indicate the same it will not work with your laptop

The Maxoak 20V output has a 5A rating. If your laptop is less than 5A it will be able to recharge your laptop’s battery. If it’s higher it will still be able to charge but not as fast as it would with the AC charger.

If your device is rated higher than 100W it may not charge as it will trigger the overcurrent protection and the power bank may shut down.

A higher current than your device rating may not damage your device and you shouldn’t see any issues with this as long as you match the voltage. The thing is just don’t go overboard and you won’t see any performance issues.

Just the type of connector at the end of your laptop’s AC charger. If it is not like any that come with Maxoak K2 it may not work with your laptop.

The Maxoak comes with an adaptor that you use for charging. This is because it has a DC input and cannot be charged using AC power directly. Maxoak Power Bank can be charged in under 5 hours via AC power. You can also charge the Maxoak power bank with a Solar panel through its 16.V/2.5A DC input.. Check out for any Foldable 100 Watt Solar panels which you can easily carry along the power bank and your laptop.