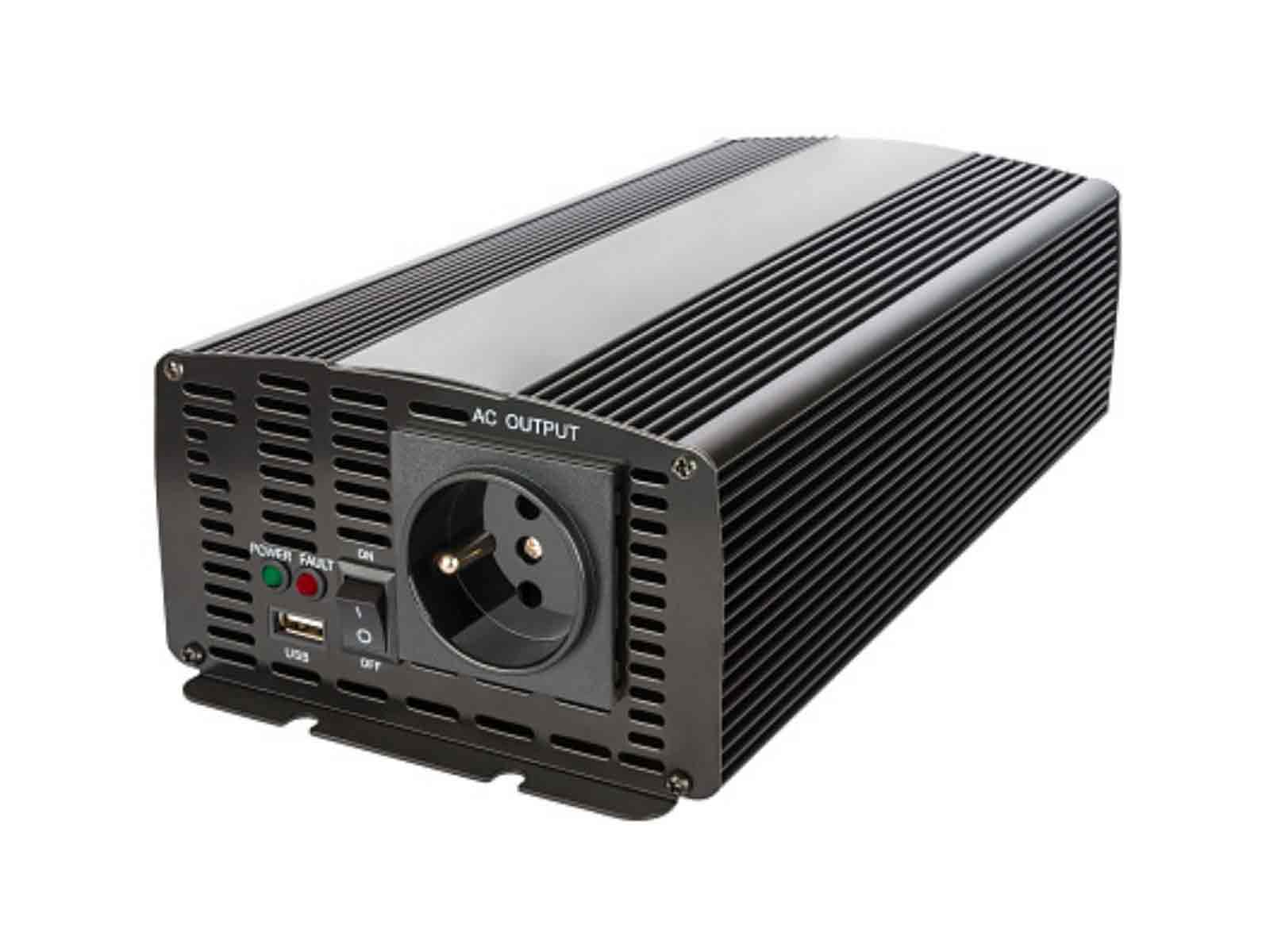 Solar Panels produce power as a 12V DC current while most household appliances including TVs, Radios, Coffee makers etc run on AC power (220 – 230v). Hence this DC power will need to be converted in order to power these devices. This is where a power inverter comes in. An inverter converts DC (Direct Current) electricity to AC (Alternating Current).

We look at the various types of Inverters, types of setups with solar, and choose the best one for your set up.

There are two main types of Inverters in the market – Modified Sine wave and Pure Sine Wave, etc. There used to exist a third type – Square Wave inverter which was made obsolete by the other two. But let’s start there:

The square wave inverter is among the first type of inverter. They are called “Square Wave” inverters because their switching frequency output (the rate at which they switch on and off) is similar to the shape of a square wave. They are quite cheap and can run small tools and radios.

A modified sine wave inverter is an improved version of the square wave that provides smoother power than traditional modified or square wave inverters. Its waveform is similar to a square wave, but with extra steps. It uses one or more LC filters in order to reduce harmonics and improve the quality of power output.

The main advantage of this kind of inverter is that it can be used for most electrical appliances. This is because the modified sine wave inverter provides a “somewhat” clean power source which is much better than the traditional square wave inverters. This means that you can use this type of inverter to operate household items such as televisions, lights, fans, and so on.

They are usually used with sensitive equipment such as computers, microwaves, and industrial machinery.

Using an Inverter with Solar

There are two main types of setups when using inverters with Solar Panels; Grid-tied and Off-Grid systems.

In a Grid-tied system, your Solar power system is working alongside power supplied from your mains power. Solar Power is delivered to your home alongside power from your mains. If solar power is insufficient power switches back to grid power. The inverter constantly feeds power to your mains and the system works alongside your grid power. There are minimal interruptions in case of cloudy conditions and increased power demand.

You can also create a hybrid system and combine the two with an off-grid system when you have no power from the Grid and a Grid-tied inverter to supplement power from your solar system when there is high demand.

You can choose an inverter with a higher wattage than you need. This will give you more headroom and ensure that the inverter covers any future appliances that might be added to your system. For example, having an inverter with a power output of 3000 watts is better than one with 2000 watts when you live in an area where heavy-duty appliances are needed such as air conditioners or water heaters.

The amount of power an inverter requires to start will always be higher than the running amperage. So for example, if you have 3kW loads and you are using a 1kVA inverter, during startup the load on the inverter is actually 3 kW. It’s recommended to choose inverters that have the highest rating so the surge rating is not an issue.

It’s best to choose an inverter that can operate at a voltage near your solar panels’ output voltage range. Hence, if you are planning on using 36V panels for your system, it makes sense to use a 48V inverter. In case you need to add more panels in the future, then it’s easy to do so with a higher operating voltage that your inverter supports. If possible, get an inverter with a wide range of working voltages.

Inverters are rated based on an ideal condition of 80 degrees Fahrenheit at sea level. However, the actual conditions will be different from this. This means that it’s best to buy an inverter with a higher amperage rating as you might need more power during both startup and operation.

For example, if your inverter operates at 25% load for an extended period of time then it will run hotter and the running amperage might be higher than normal. Hence, it’s best to choose inverters with higher amperage ratings.

Most direct current (DC) appliances such as air conditioners need 2x – 3x their startup amps when they first turn on before they start stabilizing. It would be best to get an inverter that has a surge rating higher than this value. For example, if you have 15 amps worth of DC appliances (x2), then the ideal surge rating you should look for is 25 amp or higher.

Inverters tend to weigh between 50-60 lbs and it’s best to get one that has a handle for easy carrying. Inverters with large power outputs tend to be heavy and hence it might be difficult to carry these inverters by yourself.

It’s always better to get warranties that are transferable to the new owner should you decide to sell your system at some point in time.

Inverters tend to have some noise emanating from the fan as this is required for cooling purposes. Inverter manufacturers rate their inverters as silent or noisy based on a scale of 1 to 5 where 1 represents the least amount of noise and 5 is the noisiest. So, if you need an inverter that is silent then it’s best to check this parameter before buying the inverter.

Many inverters have a couple of USB ports where you can charge your mobile devices. This feature comes in handy especially if you are away from civilization or at a campsite. It’s also possible to use a DC to AC power inverter in order to charge your DC devices.

Some inverters come with mounting brackets and therefore, it can be easy to mount these units on a wall or inside a box. Other kinds of inverters will need an external battery box for mounting purposes which might not be as straightforward as mounting a wall-mounted inverter.

What is the difference between String and Centralized Inverters?

There are different types of solar inverters, namely the centralized inverter system (centralized grid-tied) and the non-centralized inverter system also known as stand-alone systems. The string inverter is connected with multiple solar panels in order to produce a higher level of voltage and then to the central inverter that distributes power from all the interconnected solar panels to your local utility grid. This system works if you have access to a good connection with the utility grid where there is no risk of blackouts or tripping due to excess production of energy at a given point in time.

In a string system, each solar panel has its own micro-inverter and is connected with the central inverter. This type of system works best when there are fluctuations in energy production from one group of panels to another in a solar power plant.