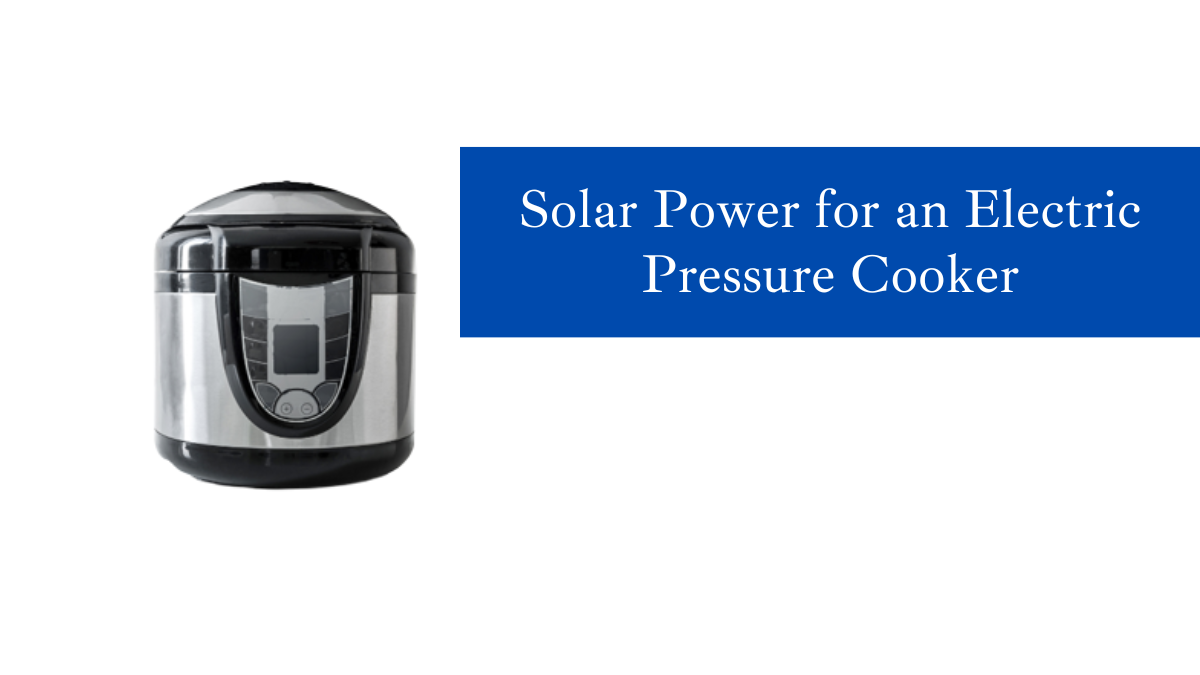 The amount of power that an electric pressure cooker used depends on the size. The size of the appliance is measured in quarts. Smaller cookers are typically around 6 quarts while larger models can be as large as 10 quarts or more. The amount of power also varies depending on whether you’re cooking at high or low pressure. A 6-quart or 6-liter pot will use around 1000 watts while a 3 quarts pot will average around 700 watts.

So how much solar power will you need for a 700-watt 3 quarts pot?

To run a 700-watt pressure cooker for an hour you will need a 300 Watt Solar panel and a 24v 200Ah Lithium Battery. However, if you are just making some beef stew which needs around 20 minutes in the pot you can use a 70Ah Lithium Battery and a 100-Watt solar panel. In whichever case, you will also need an inverter rated 800 watts or higher.

Electrical energy is measured in Watt-Hours. The length of time the pressure cooker operates determines how much power it uses. Watt-hours take into consideration the number of hours you will be running your Pressure Cooker.

To calculate Watt-Hours you multiply the Wattage of the device or appliance and multiply by the number of hours you use the device.

If you want to use a pressure cooker for 1 hour, you will need 700 Wh of energy.

This number will help us determine how many solar panels we’ll need and the number of batteries as well.

How Many Solar Panels for an Electric Pressure Cooker

Solar panels are made up of many solar cells, which convert sunlight directly into electricity. The size of the solar array and the output is dependent on the area, altitude, and how far you are from the equator.

The amount of solar energy that reaches any point on Earth is affected by:

The angle at which sunlight strikes a surface (the higher it is in the sky, the greater this angle is).

The time of day — solar radiation peaks during the summer months when there are more hours of daylight than at other times of the year.

Cloud cover — clouds can block or reflect sunlight depending on whether they are made up of water droplets or ice crystals (which reflect light).

We use a ballpark figure of 4 sun hours to round off for cloud cover and efficiency. In an area that receives around 4 hours of sunlight a day, you will divide the total Watt-hour requirement by this number.

Again we double this again to increase efficiency to 300 Watts.  A 300-watt solar panel is more than enough to power a pressure cooker for 1 hour however it is not the determinant, you’ll need a battery that will power your device via an Inverter.

What Size Battery to Run an Electric Pressure Cooker

From the example above we’ve seen, we’ll need around 700 Wh in order to run a pressure cooker for 1 hour a day.

In order to get the size of the battery, you would need to run the pressure cooker you will need to convert the Watt-hours to Amp-hours. This is how most batteries are rated. Amp-hours is 1-amp of power expended over one hour.

To calculate Amp-hours you divide the Watt-hours by the voltage. The voltage in a battery bank is usually between 12v and 24v depending on how you wire the system.

Solar batteries are recommended to be discharged at 0.2C or at 20% capacity. So for 30 amps, you’ll need a battery that is at least 150Ah battery. This battery can last up to 5 hours with the pressure cooker. Therefore the recommendation would be to for a 200 Ah 24V battery or two 100Ah batteries wired in series.

While the 350 Watts solar panel will be able to recharge the capacity used by the cooker in 4 hours to fully recharge a 200Ah battery you will need a 500 Watt solar panel.

An electric pressure cooker is a great appliance to have off-grid. It consumes less energy and cooks efficiently compared to other types of electric cooking appliances. Because it uses steam to cook it can cook quite fast and can cook vegetables in under 3 minutes and stews in 15 to 20 minutes.  Therefore it does not require a big solar system in order to run it.